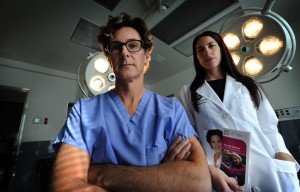 Dr. Peter Lennox and Dr. Sheina Macadam inside their surgery room in Vancouver, B.C. on August 28, 2012. The number of mastectomy patients waiting for delayed breast reconstruction surgery in Vancouver was so overwhelming that the in-demand plastic surgeon was forced to stop accepting new delayed cases. In 2009, Dr. Sheina Macadam was recruited to help handle the workload.
Photograph by: Mark van Manen , Vancouver Sun

The ancient Egyptians described it as a “coagulum of black bile” within the breast.

In their papyrus writings, dating back to 1600 BC, they surmised that getting rid of the excess bile¬ — through surgery, special diets, purging or even attaching leeches to draw out the bad blood— could cure the disease.

Breast cancer is not a new phenomenon, and neither are attempts at treating it.

In 1889, American surgeon William Halsted, a founder of renowned Baltimore teaching hospital Johns Hopkins, performed the first radical mastectomy. The disfiguring procedure, which removed the entire breast and pectoral muscle, prevailed as the standard treatment for most of the 20th century.

It wasn’t until 1963, with the invention of the silicone gel breast implant, that modern reconstructive techniques emerged.

Over time, breast reconstruction has become less invasive and more refined. With the delicate surgical options that surgeons have at their disposal, women rarely need to live without breasts.

Yet relatively few women, about one in 10 in Canada, ever undergo reconstruction.

The hurdles women face in getting the surgery are accepted by many as a fact of living in a country with a universal health-care system with its seemingly infinite list of patients and finite pool of resources.

In the final instalment of this six-part series, Canadian plastic surgeons debate solutions for the problems that prevent many women from receiving an important final procedure in their breast cancer treatment.